Sign up for our yearlong or Summer AmeriCorps VISTA positions!

The mission of *culture is not optional is to work for the flourishing of all in our community through radical rootedness and boundless imagination.

Imagining and building collaborative flourishing in our rural city.

Kindling an incarnational vision of the good life through imaginative gatherings that foster belonging, learning and celebration.

Fostering storytelling and conversation around diverse models of faith practice in everyday life.

Growing imagination and friendship through food, art, and play since 2009.

POEM: You are free

On June 17, 2021, Juneteenth became the 11th U.S. federal holiday after decades of work by citizens. The holiday, which has been celebrated by Black communities since 1866, recognizes the date on which the last enslaved people in the U.S. heard the news of the Emancipation Proclamation. Here, Aundrea Sayrie—a poet, spoken word artist, and all around force for justice and beauty who lives in Three Rivers—offers a poem in commemoration.

Lincoln Set it off
And with the 13th it was accomplished

Slavery in the United States
Was declared to be abolished

The ancestors didn’t suffer for that

They were stolen, bought, and sold
Every intimate part exposed
Obligated to fulfill every law imposed

They bled, filling sacks, under blistering suns
With babies on their backs

BUT, their stronghold had a limit
Broken maybe,
but, they couldn’t destroy their spirits

They would set us free again
They marched, and were martyrs,
For you, your sons, and daughters
They wept, and still pursued danger
Our destiny reconstructed by these game changers
Tubman, Robert Elliot, Frederick Douglas, Hiram Revels,
Joseph Rainey, Martin R Delaney
And slew of other rebels

Even After ALL of that
Chile, Chile, Chile
Some of ya’ll not making the ancestors proud
Like I said before you missed the addendum
And are exhibiting signs of Stockholm syndrome 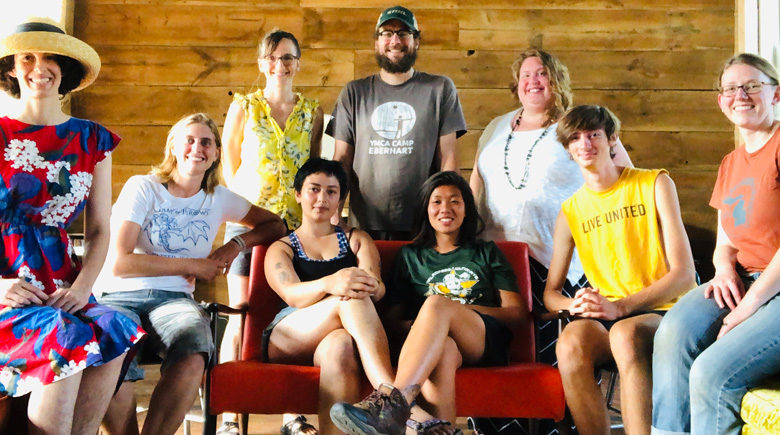 *culture is not optional (*cino)/The Huss Project is now accepting applications for three full-time AmeriCorps VISTA positions and three AmeriCorps Summer Associate positions. We’re looking for folks who will help us take our work to the next level in the areas of food systems, education, and economic development through the Huss Project, World Fare, and other partners in Three Rivers.

*culture is not optional runs the Huss Project, which is transforming a former elementary school in the rural city of Three Rivers, Michigan into a community hub for growing our capacity for imagination. For the next year, we are focusing our efforts on building a more resilient and just local food system in our rural city.

Huss is at the center of a multi-faceted, community-wide effort to strengthen local food systems, particularly for low-income households and using universal design principles that improve the system for all. In the inner circle of the ecosystem is an urban farm, a neighborhood farmers market, a food distribution program, and a community-run grocery store. These entities are connected to numerous food producers, businesses, civic organizations, and social service agencies throughout the city. The AmeriCorps VISTA Food Systems Innovation Project will help build the capacity for this system to meet the next level of its potential.

Experience with activities like social research, community development, event planning, education, program development, volunteer coordination, permaculture design, food systems, non-profits … these are the types of things we’re looking for in people who will thrive collaborating at a high level with a grassroots org in a funky, small, Midwest city. We’re looking for people with solid enough experience to function as peer collaborators in creative design toward significant community outcomes, in a spirit of curiosity, joy, and accountability. Here are four words that are floating around for us at the moment as we search: compassion, collaboration, innovation, and detail-orientation.

Visit our listing on the AmeriCorps site to submit your application. Applications are open until April 10, but we’re looking to fill these positions as soon as possible to allow our VISTAs to plan for a May 10 start date. Here are some more details:

Thank you for your help in spreading the word and please let us know if you have any questions! We’re really looking forward to this next phase of our community’s work in Three Rivers.

*culture is not optional (*cino)/The Huss Project is also looking for three compassionate, creative, hard-working people to join us full-time for 10 weeks this summer as Americorps VISTA Summer Associates! Applicants should be 18 years of age or older, with a passion for serving our Three Rivers community through urban farming, event planning, and youth engagement. The term runs from June 1 – August 6, with a living stipend of $2,569.70 and choice at the end of the term of an education award of $1,311 or a cash stipend of $345. Housing is not available for Summer Associates. Applications are being accepted until May 7 or until all three positions or filled, so apply today through the AmeriCorps web site!