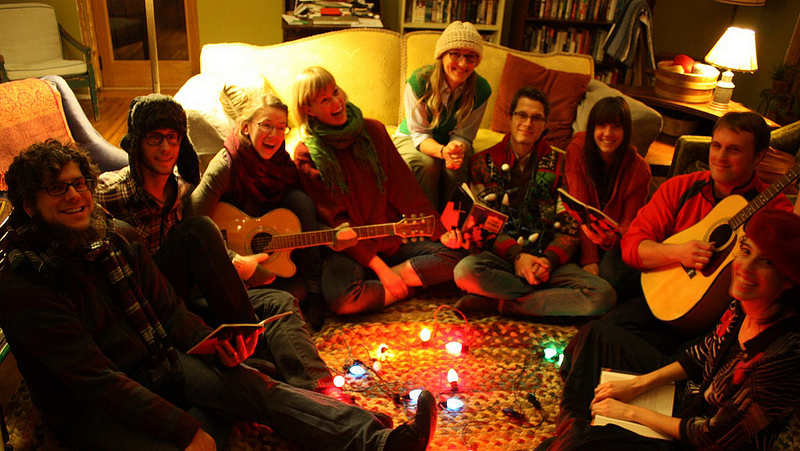 Happy Advent!  Even as we set aside time for expectation for the future, we thought we’d take the opportunity to look back at what the past year has been like for the folks connected with *culture is not optional.  There are about a dozen of us now in Three Rivers who participate in various aspects of community life on the ground here and there continues to be an international community of *cino followers who regularly participate through reading, encouraging, donating and visiting.  We are so grateful to experience God’s abundance in the form of all of these wonderful people!

With love and hope,
The *cino community

Winter is a quieter time for the *cino community as we honor the rhythms of creation and spend more time reading and reflecting.  That said, Rob & Kirstin taught on popular culture, the empire and the Kingdom of God at Calvin College in Grand Rapids, Michigan, which is always sort of a whirlwind!

Rob & Kirstin attended the annual Jubilee Conference in Pittsburgh.  Several of our folks also helped support the annual Chocolate Affair, which is a fair trade bake-off (and, this year, brew-off) that happens at World Fare.

During two different weeks, we hosted service-learning spring break groups from Calvin College and Geneva College on themes of place, contemplation, activism and storytelling.  We also got a ton of demolition and clean-up work done at the Huss Project.  During the Calvin trip, we hosted David Bazan for a house show and packed out the VG-R living room.  On the last weekend of the month, we invited a group of Calvin students to come for a day retreat on the relationship between hope and cynicism (and also experienced the annual AYCE pancake breakfast at the Volinia Outcomes School maple project, which gives us hope for the world, indeed). At the end of the month, we helped organize the third annual Rivers of Justice film festival, which featured the films Last Train Home and Miss Representation.

Several of us began our Easter celebration at the St. Gregory’s Abbey Easter vigil and then Emily hosted quite a gang, including her parents who were visiting from Maryland, for Easter dinner at the rectory.  Later in the month, we displayed for *cino in the exhibit hall at the Festival of Faith & Writing in Grand Rapids, connecting with new friends and old and introducing the wonderful Eat Well study guide, created by Deborah!

We held our annual face-to-face *cino board meeting in Three Rivers and also had a table and painting project at the Spring Arts Festival at Calvin College in Grand Rapids.

We began June by hosting a storytelling night welcoming Jay, Kyle, Hannah, Margaret and Christopher as our interns for the summer!  Their very first official task was to participate in the local Stand for Children Day event and we were all blown away by the creativity and attention local kids showed with our painting project.  The *cino gang also joined Trinity Episcopal Church, which hosts our resident community in their rectory, for their annual spring clean-up and potluck.  With everyone’s help, and especially Hannah and Christopher, we launched Family Fun Night, a weekly gathering at the Huss Project featuring snacks, games, crafts and conversation.

In July, we hosted the third annual Future Festival at the Huss Project!  Visitors from near and far enjoyed food, crafts, games, a farmer’s market, a book sale, a community garage sale, art vendors.  Future Fest was also the launch date for a gallery at the Huss Project featuring a series of art installations, including an assembly of the painting projects done earlier in the year by Calvin College students and local kids.

We regretfully cancelled the Practicing Resurrection conference in August due to low numbers and late promotion, but we had a great weekend with visiting friends anyway, with plenty of shared meals and music. We also hosted a group of RA’s from Calvin College for service-learning, exploring how several of *cino’s core values play out in our work in Three Rivers and their work as dorm leaders.  August was also the big wedding month for Chad and Stephanie, and we all enjoyed pitching in by baking pies, assembling terrariums, playing music and taking care of the many fun tasks required by such a meaningful outdoor celebration.

If you look back at our staff meeting notes, you’ll notice that in February, an item appeared on our calendar: “September vacation?  Yes, please!”  Well, we honored the need to rest after a busy summer by taking a break from *cino activity and several of us headed out of town for extended periods of time, while others stuck around and enjoyed the late summer in Three Rivers.  *cino folk also pitched in to help coordinate a big off site sale for World Fare while Rob and Kirstin enjoyed three weeks in Europe. We also celebrated ten years of publishing catapult magazine this fall!

October was mostly spent catching up and regathering after weeks away, including reflecting on the many experiences from our travels that made us see our work in Three Rivers in a new light.

Our rest must have worked its magic, because November was an explosion of activity!  Jordan moved in and became the newest resident of the rectory in the middle of it all.  We’d been talking for over a year about launching a fundraising campaign and the time seemed right to pull together and do the background work that needed to be done in order to begin the campaign.  We wrote web site text, designed logos and prints, brainstormed ideas for special events, collected poems and got organized for the …

Brick Campaign!  December has been a delightful month of giving and receiving as support has begun flowing in for the Huss Project, as well as for the work of *cino that goes beyond the bricks and mortar at 8th and Broadway in Three Rivers.  Throughout this full year, we’ve also continued to publish issues of catapult and keep the conversation going near and far about what it looks like to be a people of justice, love, peace, simplicity, joy, hospitality and generosity in our world today.  May you experience all of those things and more as we re-tell the story of humble beginnings in Bethlehem over two millennia ago! 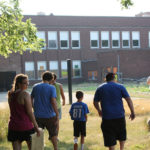 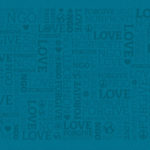