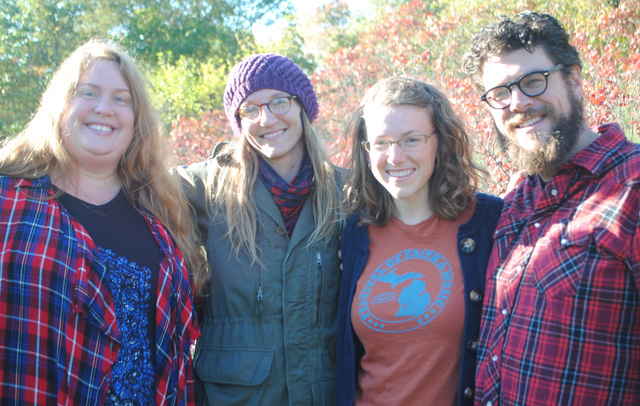 On October 7, those of us who currently comprise the core *cino community gathered at a retreat house near Three Rivers to spend time growing in friendship, sharing good food, and reflecting on the year past and the year to come. Like our past retreats, we enjoyed times of intense, meaningful conversation interspersed with rest and play.

This year, our time together helped us get organized around some specific priorities for 2017 and some new ways of working together to achieve our tasks and goals within those priorities. The four things that rose to the surface that we want to work on in 2017 are:

We’ve identified a number of measurable goals within these overlapping categories, including existing programs and new efforts, as well as discerning some things we’ll leave behind for now in order to make space to grow in other areas and be open to the gifts and interests of new core community members. We’ll continue to organize our work through weekly meetings on Mondays, and also to grow in relationship with one another and our neighbors through things like Monday nights at the Riviera Theatre Bar and Friday night potlucks. We’re also looking to support each other more as a community through collaboratively developing and sharing our own personal care plans for the coming year.

Forming the foundation for our work conversations during the retreat was a time of reflection on several readings that touch on the theme of work: how we do what we are called to do with deep joy and gratitude. The readings included a couple of essays from our online publications (one by Brother Abraham and one by Gary Guthrie), a poem by Marge Piercey, and a quote from Thomas Merton that I find to be particularly cautionary for our busy, committed group:

There is a pervasive form of modern violence to which the idealist…most easily succumbs: activism and over-work. The rush and pressure of modern life are a form, perhaps the most common form, of its innate violence. To allow oneself to be carried away by a multitude of conflicting concerns, to surrender to too many demands, to commit oneself to too many projects, to want to help everyone in everything is to succumb to violence. The frenzy of the activist neutralizes his (or her) work… It destroys the fruitfulness of his (or her)…work, because it kills the root of inner wisdom which makes work fruitful.

We also considered a quote from Kahlil Gibran that echoes Merton’s warning:

Work is love made visible.
And if you cannot work with love but only with distaste, it is
better that you should leave your work and sit at the gate of the
temple and take alms of those who work with joy.
For if you bake bread with indifference, you bake a bitter
bread that feeds but half man’s hunger.
And if you drudge the crushing of the grapes, your grudge
distills a poison in the wine.
And if you sing though as angels, and love not the singing,
you muffle man’s ears to the voices of the day and the voices of
the night.

With this balance in mind, we reviewed a first draft of a design for the Huss Project property, sharing questions and feedback. We know it will take a lot of work to move forward with this design, but we’re excited about the prospect of seeing some major progress happening in the coming year. To learn more about the design, visit a more detailed post with an image of the first draft over on the Huss Project web site.

If this all sounds like something you’d like to get involved in in some way, please let us know! We are very open to the participation of more volunteers and new core community members as we head into a new year full of good work alongside our neighbors in Three Rivers.